How to eat Spanish Ham? 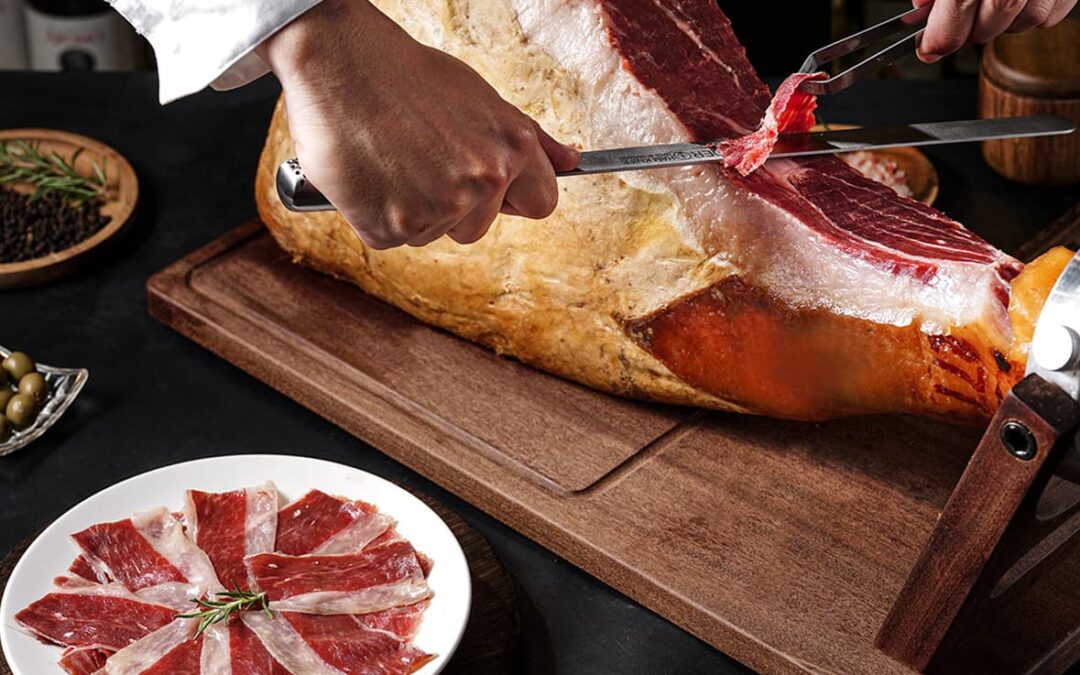 Ham is a historically important food. This has been dried and cured with salt for centuries. Spanish ham is highly recognized as a gourmet food both in Spain and around the world. It is eaten regularly in most Spanish households. There are various types of cured ham in Spain, ranging in price from economical to very expensive and they are quite accessible, carried in grocery stores, sausage shops, and supermarkets. 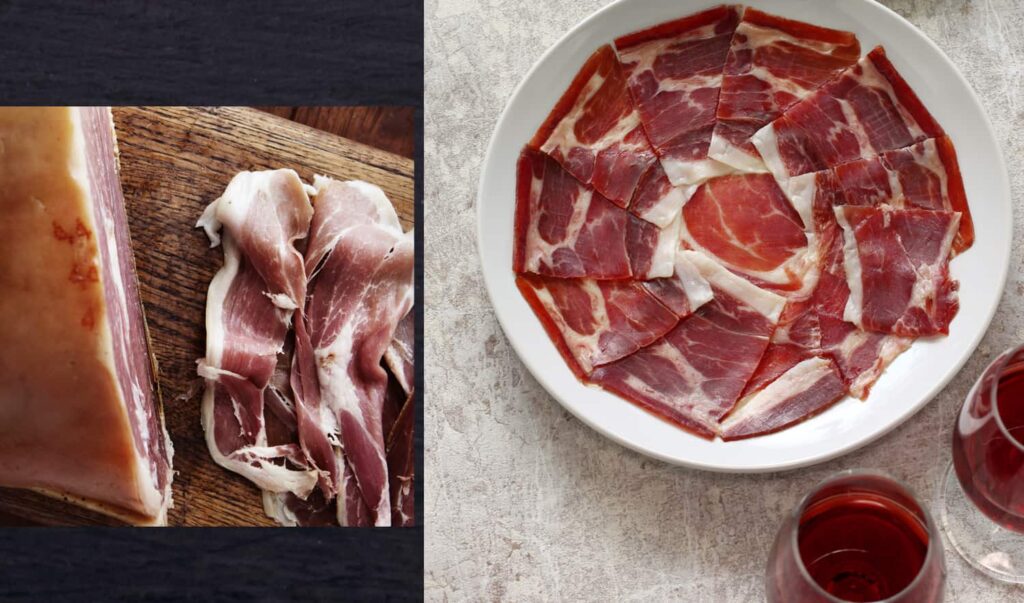 If this is your first time hearing about Spanish Ham, you should know there are basically two different types of cured hams, jamón serrano or “mountain ham,” and jamón ibérico or “Iberico Ham.” Iberico Ham, as the name suggests, is made only from the Iberian pig. The breeding of the Iberian pig is restricted to an area in Southwestern Spain and Southeastern Portugal. Although fed some cereals, these pigs also roam the countryside and feed on acorns. The curing process for Iberico Ham lasts from 14 to 36 months. Meanwhile, Serrano ham is made from several different breeds of white pigs, such as Duroc, Landrace, or Large White. They are fed mainly cereals and cured from 7 to 16 months. And as a last note, there are almost 2,000 producers of serrano ham in Spain.

Iberico Ham is broken into different quality categories based on the pigs’ diet, and the percentage of Iberian genes present in each pig. You’ll see this marked on the leg by a colored label tagged just above the hoof.  They come in four colors; black, red, green, and white and this is due to a descending order of quality. Iberico Ham has its own classification, these are the three main types you can find in the market: 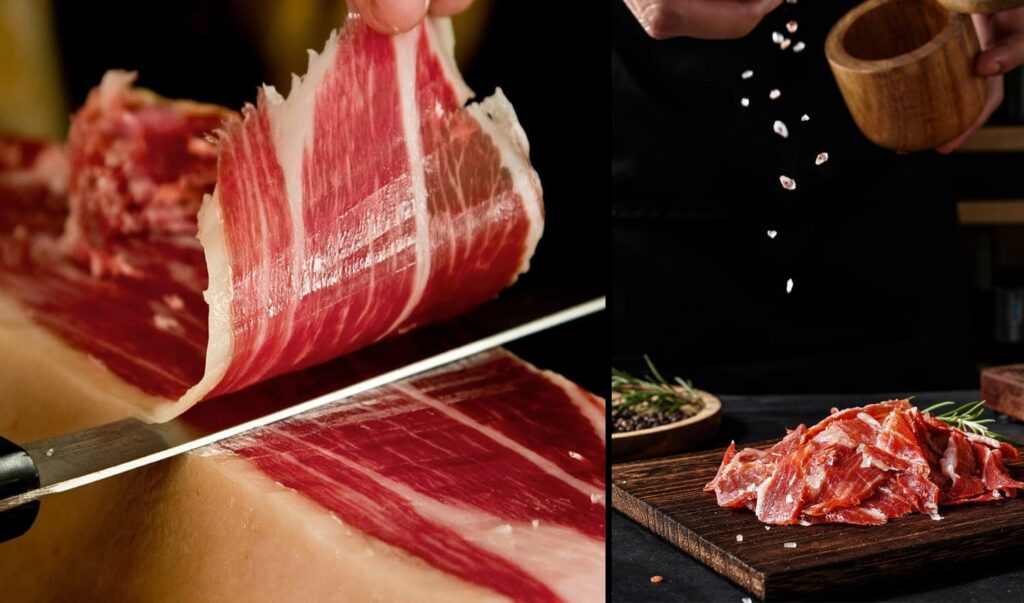 This type of ham is made of pigs forage for acorns  in open fields each winter and fall. You can look for a black tag on these hams, which means it is a full-bred Iberian pig.

Fact: only about 5 percent of Spanish ham bears a black tag. 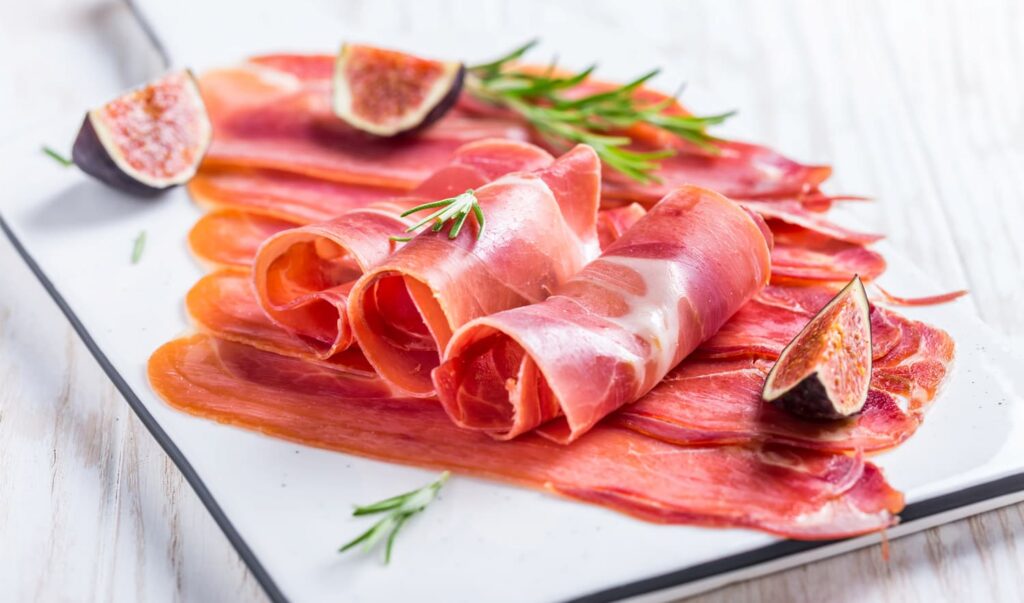 These are what you might call “free-range” pigs, being at least 50% Iberian. They forage for their food in open fields, eating wild plants and some acorns. But they don’t get enough acorns to make up a full diet, so the farmer supplements them with a cereal-based feed. These hams are marked with a green tag, and must be cured for at least three years. 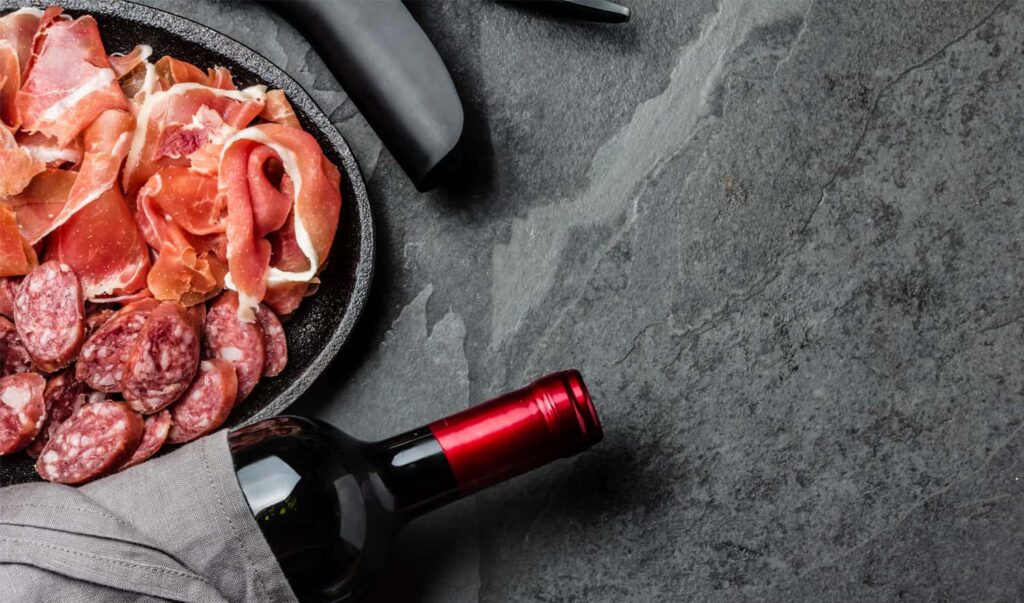 These pigs are raised on grain and cereals and eat little or no acorns at all. These are conventionally-farmed pigs, being at least 50% Iberian.This is about 2/3 of all Iberian ham production and is cured for at least two years. You’ll find these marked with a white tag.

Now you know what Spanish Ham is, Its types and more about Iberico Ham. How to serve it? Iberico Ham is usually served alone.  Experts always say great Spanish ham should be eaten any other way than thinly sliced and on its own.  Carving ham is considered a skill in Spain, and the ones called maestros spend years training and practising. There’s even an annual festival of ham near Seville, including a national ham-slicing competition.

Don’t try to eat it on a sandwich or with cheese, as locals say you should only pair it with more ham. It’s a common appetizer, and the first course at banquets and at weddings. And what about the drinks? In terms of wine, Iberico Ham needs nothing more than an accompanying glass of Spanish red wine, or dry and nutty sherry. However, some others say that beers are a perfect accompaniment to Iberico Ham because their bitterness combines perfectly with the intensity of the flavor of the ham. Beer, Cava, young wines, light whites and fortified wines are therefore the ideal pairings for Iberico Ham.

At this point, you’re all set to try Iberico Ham in your meals at home. House of Caviar offers you the following products you can find by visiting our online store: 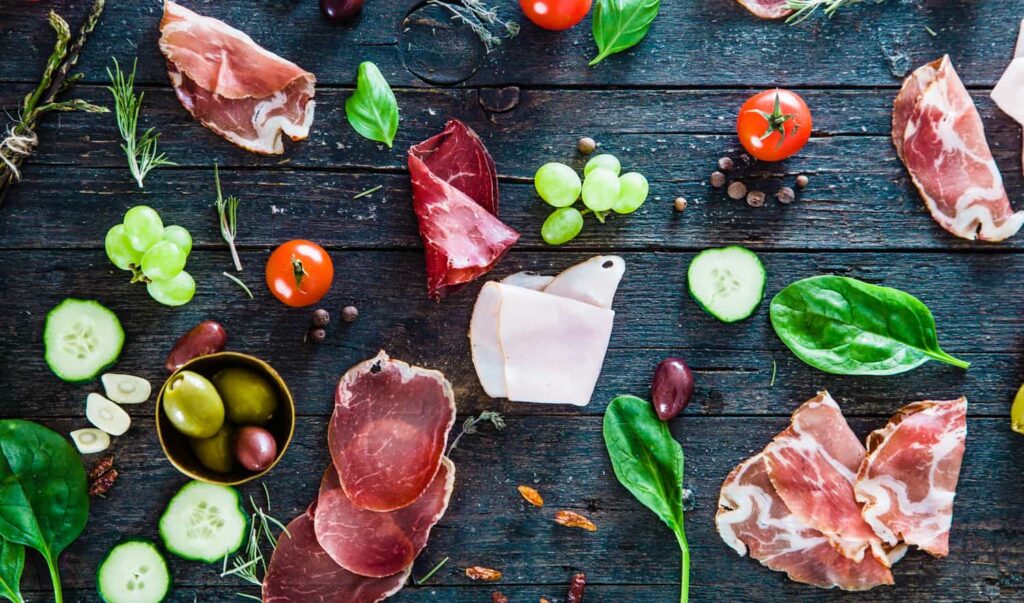 Want to keep discovering the world of special meats? Visit our store in House of Caviar. Don’t forget to check more categories such as  seafood, Caviar and gifts!  All of this, just a click away from your  home. We’ll be waiting for your visit!