All about Spanish Meats and Caviar 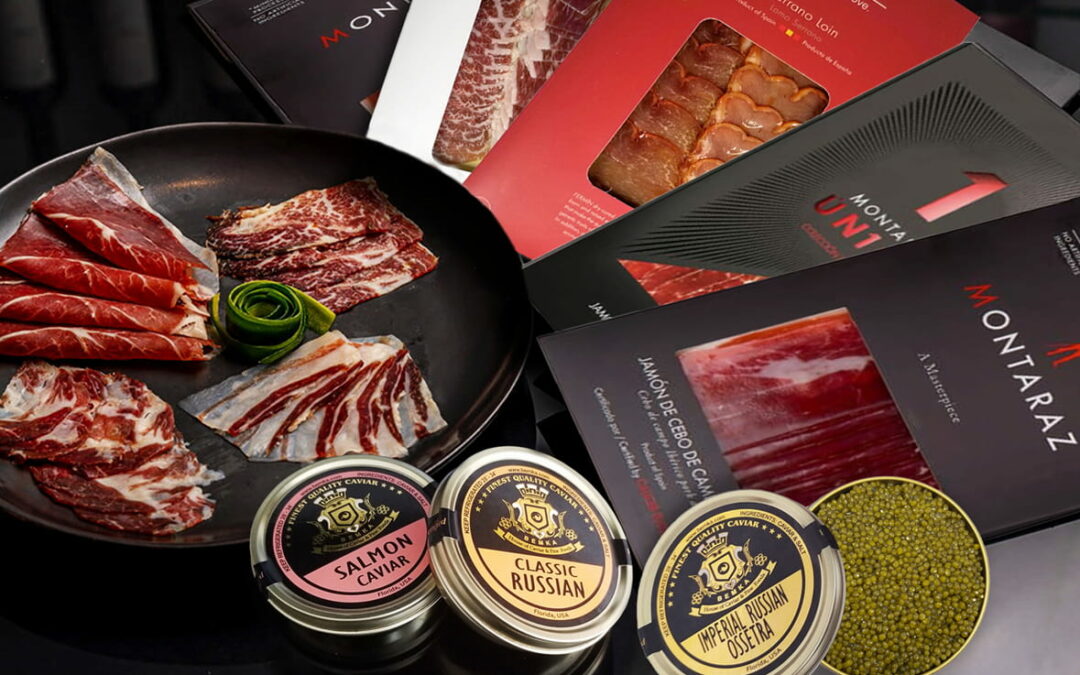 Spain is a country full of culture and exquisite cuisine. Spanish Meats – specially Ham- are the heart of Spanish gastronomy. House of Caviar wants you to not miss this culinary pleasure, that’s why we’ve selected the Spanish Meats you should try and recipe ideas for this upcoming Holidays. Spanish Meats are a great choice. Now, before getting in the kitchen, let’s learn a bit more about them. 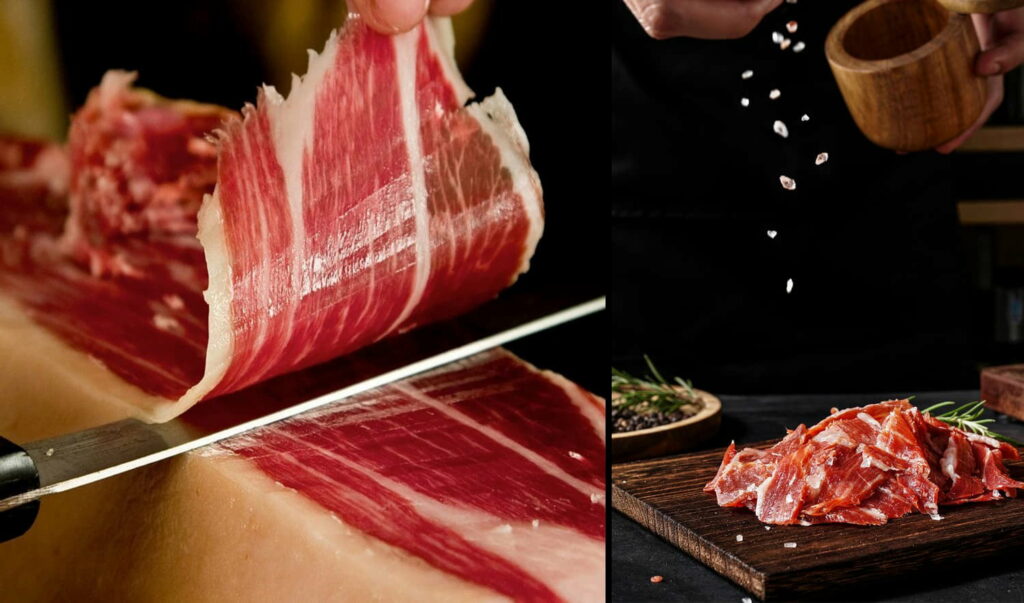 Iberico Ham: this type of Spanish Meat is known for being exclusive and expensive. Iberico Ham can only come from native Iberian pigs. These pigs have a dark grey and black colouring, with jet-black hooves. Like a lot of foods, there are different grades of Iberico Ham. The most basic-quality white label Iberico Ham comes from mixed-breed pigs who are reared in an enclosed area, fed with animal feed and allowed a minimum of 21.5 square feet of space per pig. This Meat is known not just for its flavor but for its health benefits. Iberico Ham is extremely rich in oleic acid and healthy fatty acids, so if you’re ready to get this Spanish Meat visit House of Caviar and find several options for Iberico Ham:

Bellota Ham “Pata Negra”:  Pata Negra ham comes from pigs raised in freedom in the pastures Iberian 100% and fed with natural grass and acorns. The result is more fat around hams and less fat infiltrated, a darker color and higher price because their production is lower. Traditionally it is said Pata Negra ham to the Iberian hams for its black hoof. Also, over the time it has been a term that assigns quality for many products, saying that a product is “Pata negra” is to say that is the highest quality. Buy Pata Negra Ham visiting our Spanish Meats section:

Serrano Ham:  As in Spanish, Jamón serrano is the name of the most common type of Spanish Meats. In fact, it makes up 93% of all ham production in Spain.  It’s simple, tasty and it may be considered the lower-level kind of Spanish Meats. Serrano ham comes from pigs with the name of “white pigs”, these pigs are almost always farmed intensively in enclosed pig houses and eat a grain-based pig feed. At its most commercial, the leg is cured for the bare minimum time, and is ready for sale no more than 12 months later. Check our variety of Serrano Ham here:

At this point you know why Spanish Meats are so popular and attractive to all eaters. Pick your favorite and get ready for Thanksgiving Day with some spanish flavors on your table. And if you’re up for a real elevated dinner party, go for Caviar! These two combine perfectly and your guests will be more than amazed. 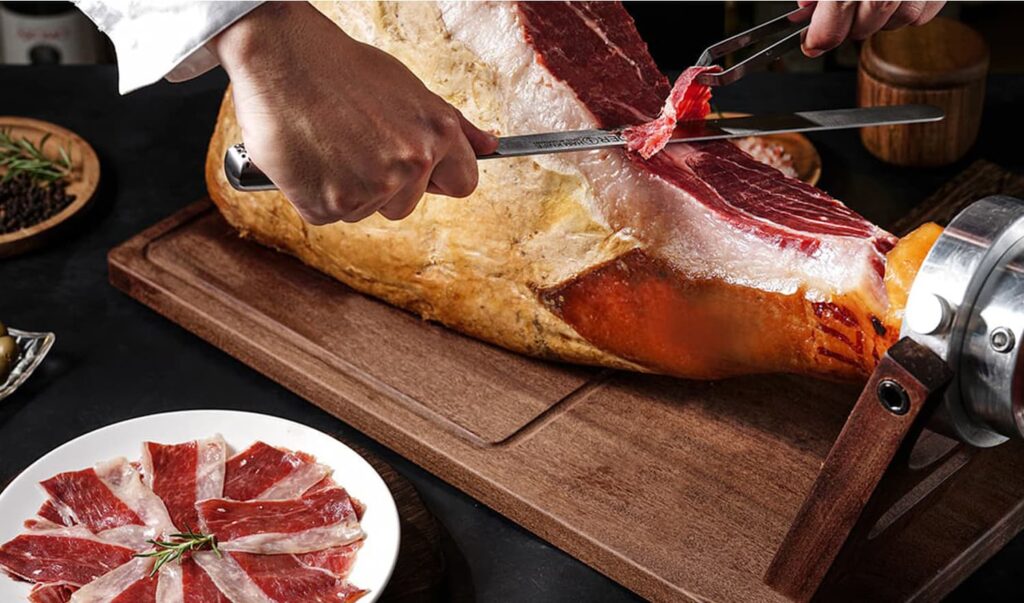 First, finely dice the potato. Heat the canola oil in a medium saucepan over medium-high until a deep-fry thermometer reads 350°. Add the potatoes and cook, stirring, until golden, about 2 minutes. Strain over a fine mesh sieve into a saucepan or a heat-proof glass bowl. Transfer potatoes to a paper towel-lined baking sheet and toss with salt. To serve, spread each Iberico Ham slice with about 1⁄4 teaspoon of crème fraîche. Top with caviar and crispy potatoes and garnish with a chive. That ‘s all! 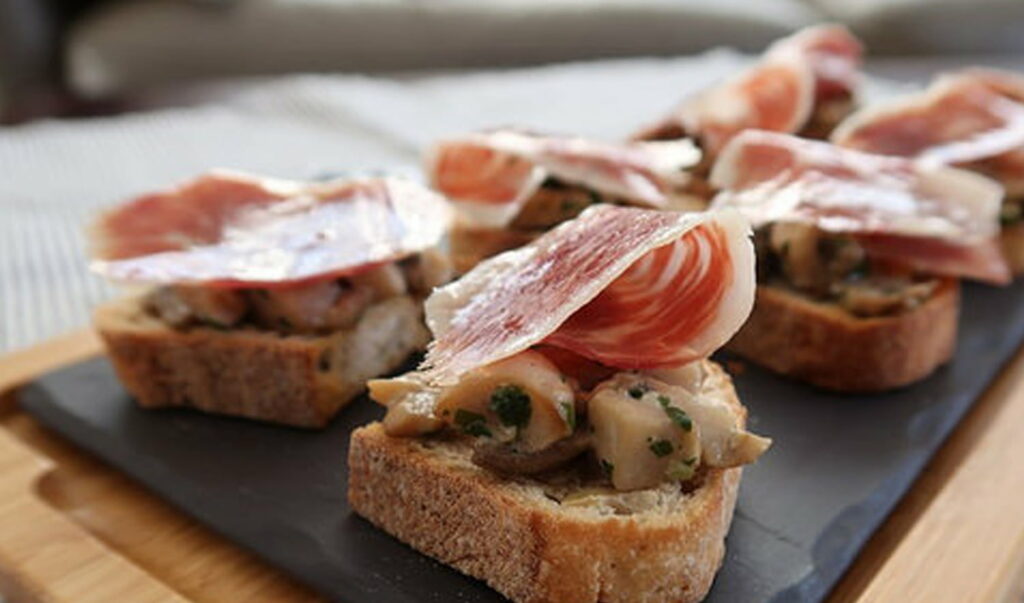 Preheat the oven to 225°C (435°F). Shred the oyster mushroom. Place the cherry tomatoes on a baking tray. Top with olive oil, a pinch of Fleur de sel and a pinch of oregano. Brush the top side of the bread slices with olive oil and arrange them on another baking tray. Put the two trays in the oven and cook for 7 minutes. Meanwhile, cook the oyster mushrooms and the garlic in olive oil. Season with pepper and fleur de sel. Top each piece of bread with mushrooms and a few cherry tomatoes. Add a slice of Pata Negra, and a basil leaf on top of it. Drizzle with olive oil and enjoy! 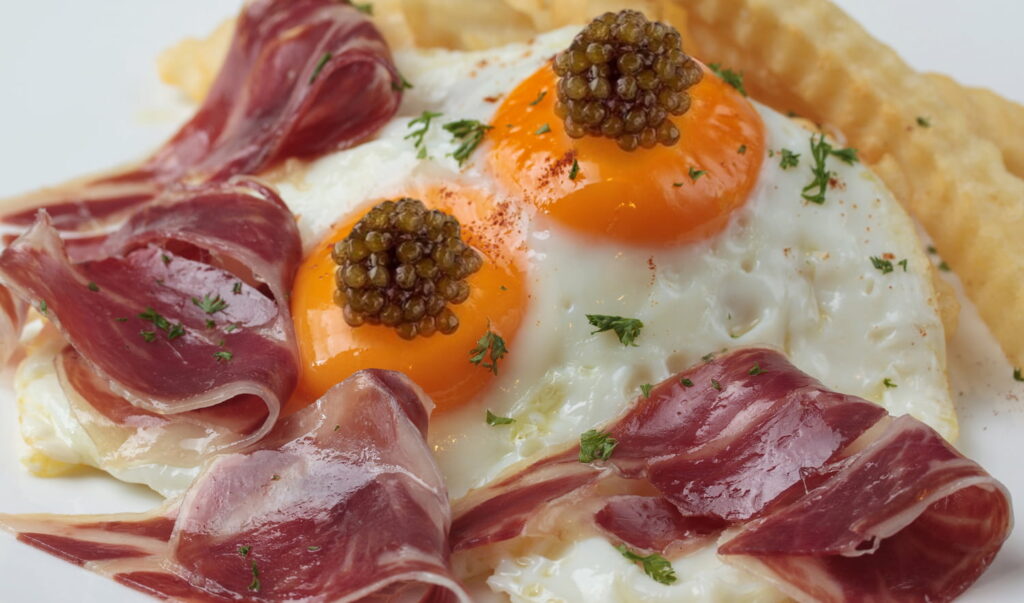 Preheat the oven to 275°. Set a rack in a large baking sheet. In a large cast-iron skillet, heat 3/4 inch of olive oil to 300°. Working in 2 batches, fry the potatoes until golden brown and lightly crisp on the outside, about 7 minutes. Transfer the potatoes to the rack to drain and immediately season with kosher salt. Keep warm in the oven. Carefully transfer 1 cup of the hot olive oil from the cast-iron skillet to a large nonstick skillet. Crack 4 of the eggs into the skillet and gently fry over moderately low heat until the whites are set and the yolks are slightly runny, about 5 minutes. Transfer to a plate. Repeat with the remaining 4 eggs.Divide the fries among 4 plates. Top each plate with 2 fried eggs, 2 slices of ham and a spoonful of Caviar, if desired, and serve immediately.

So, are you ready to start including new flavors in your recipes? This holidays there’s no way to go wrong with Spanish Meats, visit the complete section and discover all the options available for Spanish Meats and Caviar. House of Caviar offers you the greatest variety of Fine Foods for any holiday, come visit us! We’ll be looking forward to seeing you.